The story of storage: hard disk

Hard disk is a kind of storage that uses a concentric stack of disks or "platters" to record data. It is a block device, that says it reads and writes data in fixed-size blocks. Generally, the block size is 512 bytes. So from a software engineer's point of view, a hard disk is just a sequence of continuous blocks of data, and you can visit any of them freely using some kind of address mechanism.

A master boot record (MBR) is the first sector of a hard disk. It serves mainly two functions:
The structure of MBR is as follows:


Disk signature is used to uniquely indentify the boot disk by the OS and further by userland processes. But after the introduction of EDD, disk signature can be omitted and code areacan be extended to a length of 446.
By convention, there are exactly four primary partition table entries in the MBR Partition Table scheme. Both the partition length and partition start address are stored as 32-bit quantities. Because the block size is 512 bytes, this implies that neither the maximum size of a partition nor the maximum start address (both in bytes) can exceed 2^32 * 512 bytes, or 2 TiB.
See Partition Table, for more info.

Cylinder-head-sector, also known as CHS, was an early method for giving addresses to each physical block of data on a hard disk drive. Though CHS values no longer have a direct physical relationship to the data stored on disks, pseudo CHS values (which can be translated by disk electronics or software) are still being used by many utility programs.
So each sector can be addressed by a three-dimensional coordinate system (CHS). The number of sectors a hard disk holds is:
cylinders * heads * sectors
In earlier hard drive designs, the number of sectors per track was fixed and because the outer tracks on a platter have a larger circumference than the inner tracks, space on the outer tracks was wasted. The number of sectors that would fit on the innermost track constrained the number of sectors per track for the entire platter. However, many of today's advanced drives use a formatting technique called Multiple Zone Recording to pack more data onto the surface of the disk. Multiple Zone Recording allows the number of sectors per track to be adjusted so more sectors are stored on the larger, outer tracks. By dividing the outer tracks into more sectors, data can be packed uniformly throughout the surface of a platter, disk surface is used more efficiently, and higher capacities can be achieved with fewer platters. Not only is effective storage capacity increased by as much as 25 percent with Multiple Zone Recording, but the disk-to-buffer transfer rate also is boosted. With more bytes per track data in the outer zones is read at a faster rate.
However, as I metioned before, CHS values no longer have a direct physical relationship to the data stored on disks, the pseudo CHS still uses a uniform schema. The total length of CHS is 24 bits. Below is the detailed limit. See Partition Table.

Logical block addressing (LBA) is a common scheme used for specifying the location of blocks of data stored on computer storage devices, generally secondary storage systems such as hard disks. The term LBA can mean either the address or the block to which it refers. Logical blocks in modern computer systems are typically 512 or 1024 bytes each. ISO 9660 CDs (and images of them) use 2048-byte blocks. LBA is a particularly simple addressing scheme; blocks are located by an index, with the first block being LBA=0, the second LBA=1, and so on.
CHS tuples can be converted to LBA addresses using the following formula:
LBA(C,H,S) = ((C * heads_num) + H) * sectors_per_track + S - 1

As described before, the partition table in MBR can hold at most four records. Each partion can't exceed 2 TiB. To alleviat this capacity limitation, an new partition schema called GUID Partition Table (GPT) is introduced in industry. See more at UEFI.
Follows is the layout of one 16-byte partition record:


Most of the time, LBA is used to find a partition. But specification says: if a partition's start block or end block or both are under the 8.4 GB limitation, CHS address should also be correctly record. Otherwise, CHS fields have some kind of default values.
Partition type is used to label the file system used on this partition. For example, the code for linux ext2 is 0x83 and linux swap is 0x82. You can see a list of partition types by sfdisk -T. A hard disk can have at most four primary partitions for there are only four entries in the primary partition table. The following figure gives an example of a hard disk holding two primary partitions.

The story of storage: extended partition


Follows is the layout of one 16-byte partition record: 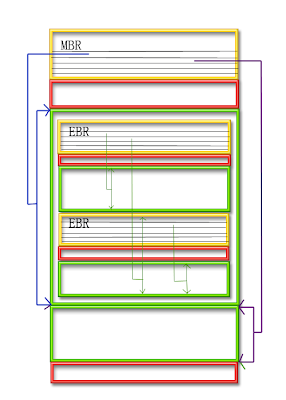 Email ThisBlogThis!Share to TwitterShare to FacebookShare to Pinterest
Labels: Cluster

1. To  view your TCP/IP settings

This should show the Network Connections. We are looking for the name here. On mine, I have one LAN interface and is named as “Local Area Connection”
2. To set a static IP Address type the following command

netsh interface ipv4 set address name=”
Where:ID is the name of the LAN ConnectionStaticIP is the static IP address that you are settingSubnetMask is the subnet mask for the IP addressDefaultGateway is the default gateway

3. Now set the DNS Servers one at a time with the followind command. For each DNS server, increase the index number.

netsh interface ipv4 add dnsserver name=”
Where:ID is the name of the Network ConnectionDNSIP is the IP address of your DNS server

This should do. To confirm, do an “ipconfig”

Set IP through DHCP Server
To set the DHCP Server, from the command line